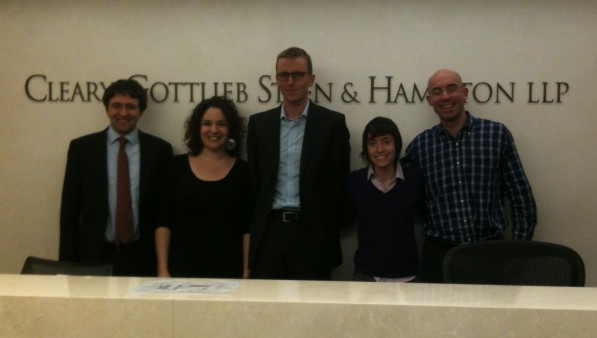 Victoria S. Belyavsky is an associate based in the New York office. Ms. Belyavsky’s practice focuses primarily on taxation. Ms. Belyavsky joined the firm in 2010. She received a J.D. degree from Columbia University School of Law in 2010, where she was a Harlan Fiske Stone Scholar. She received an undergraduate degree, with honors, from Wesleyan University in 2007. Ms. Belyavsky was the Editor-in-Chief of the Columbia Journal of Transnational Law from 2009 to 2010. Ms. Belyavsky is a member of the Bar in New York. She currently serves on the Board of Directors of the Columbia Journal of Transnational Law Association, Inc. and as Secretary of the European Affairs Committee of the New York City Bar Association. Her native language is English and she is fluent in Russian.

Jesse M. Brush is an associate based in the New York office. Mr. Brush’s practice focuses on capital markets and corporate transactions. Mr. Brush joined the firm in 2010. He received a J.D. degree from Yale Law School in 2009, where he was Notes Editor of the Yale Law Journal and Executive Editor of the Yale Journal of International Law. He received an undergraduate degree, summa cum laude, from Dartmouth College in 2006. From 2009 to 2010, he served as law clerk to the Honorable Nancy Gertner of the U.S. District Court for the District of Massachusetts. Mr. Brush is a member of the Bars in New York and Massachusetts. His native language is English, and he is proficient in Spanish.

Jennifer Kroman is Director of Pro Bono Practice, based in the New York office. Ms. Kroman originally joined the firm in 1996, was a partner from 2003 to 2006, and rejoined the firm in 2011. She received a J.D., magna cum laude, from the University of Pennsylvania in 1994, where she served as an editor of the Law Review, and a B.A., Phi Beta Kappa, in 1991 from the University of Michigan. After graduating from law school, Ms. Kroman served as a law clerk to the Honorable Phyllis A. Kravitch, of the United States Court of Appeals for the Eleventh Circuit. Ms. Kroman is a member of the Bar in New York. She is a member of the Committee on Pro Bono and Legal Services of the Association of the Bar of the City of New York and a member of the Public Service Committee of the Federal Bar Council. Ms. Kroman served on the board of directors of each of the National Center for Law and Economic Justice from 2003 to 2010 and the New York Lawyers for Public Interest from 2004 to 2006. She recently served as the Co-Director of the Uncontested Divorce Project at Sanctuary for Families.

Garth Spencer is an associate based in the New York office. Mr. Spencer’s practice focuses on taxation. Mr. Spencer joined the firm in 2011. He received a J.D. from the Duke University School of Law in 2011, where he was a staff editor of the Duke Law Journal. He received his undergraduate degree from Grinnell College in 2006. Mr. Spencer is a member of the Bar in New York. His native language is English, and he is proficient in Russian.