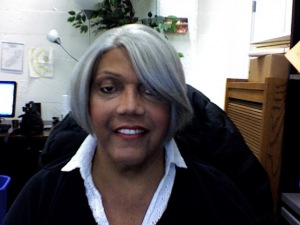 Miss Major is a black, formerly incarcerated, male-to-female transgender elder. She has been an activist and advocate in her community for over forty years, mentoring and empowering many of today’s transgender leaders to stand tall, step into their own power, and defend their human rights, from coast to coast. Miss Major was at the Stonewall uprisings in ’69, and became politicized in the aftermath at Attica, has worked at HIV/AIDS organizations throughout California, was an original member of the first all-transgender gospel choir and is a father, mother, grandmother, and grandfather to her own children and to many in the transgender community. She has given speeches and trainings to audiences of transgender and non-transgender people and has received numerous awards for her work. In 2008, she testified at the CERD committee to the United Nations in Geneva, Switzerland about the abuses of transgender women of color in and out of the Prison Industrial Complex here in the US. Currently, Miss Major is the Executive Director of the TGI Justice Project where she instills hope and a belief in a better future to the girls that are currently incarcerated and those coming home.