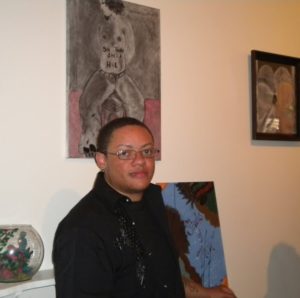 Saterius Ian Roberts also known as “SiR”: Born February 4, 1985 in Trenton, N J, and now a current resident of Gainesville, FL. A self-taught, multi-media artist, poet, and single parent who has been perfecting his natural gifts for over 20 years. An artistic sponge, Saterius is well adjusted to classical and modern art forms such as painting, sculpting and sketching. His skills also include more modern forms of artistic expressions such as abstract, body art, piercings, and tattoos. “Shades of Men” art experience is the artistic story and visual art form of the lives and journeys of Transmen, Gender Variant/ Queer, and Gender NON-Conforming individuals whom respect and agrees that “We Are All Individuals, We Are All Different Shades of Men.” In addition to his artistic prowess, SiR is a tireless activist for the Trans and Gender-Queer/ Non-Conforming Community. He was a featured artist at the first-ever Philadelphia Gender Reel Festival that took place September 9th-11th, 2010. On October 8th 2011, Saterius was at the forefront of the ground-breaking, revolutionary Philadelphia Trans March that drew thousands of supporters from across the city of Philadelphia. The March was a giant step in Trans and Gender-Queer/ Non-Conforming peoples’ visibility. Reminding SiR of the love and support that makes life worthwhile. During more restful periods, one can find Saterius and his brilliant daughter watching movies; especially Bollywood films, reading all sorts of fiction and non-fiction books alike, and creating culinary masterpieces.