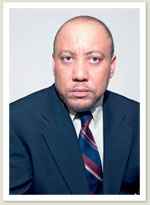 Kylar W. Broadus is an associate professor at Lincoln University, a historically Black college in Jefferson City, Missouri. Broadus is a transgender lawyer, activist and public speaker in the area of LGBT rights. In 2010, he was appointed as a Division Director of the Section for Individual Rights and Responsibilities in the American Bar Association where he oversees six committees. Broadus was also recently appointed as a Co-Chair of the newly formed ABA Committee for Sexual Orientation and Gender Identity. Broadus serves on the board of the National Black Justice Coalition where he just completed three years service as Board Chair. He is a 2010 Rockwood Institute LGBTQ Fellow. Rockwood provides an intensive leadership program designed to teach powerful visioning, listening, speaking, presentation, coaching, team-building and feedback skills to leaders engaged with advocacy and organizing for LGBTQ equality and liberation. He is a founding board member of the Transgender Law and Policy Institute. Broadus is originally from central Missouri.