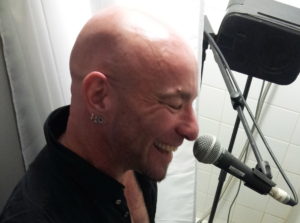 Lazlo Pearlman is a creator, performer, director, presenter and teacher whose work is often but not always generated by his FTM transgendered experience. He has been making performances since he was a ten 10 year old girl, and has traveled through -and returned to – many performance forms including physical theatre, performance art, installations, cabaret, burlesque, vaudeville, fetish shows, camp and parody, and the occasional piece of “straight” theatre. Lazlo holds a Master’s degree in physical theatre and has created one-person shows, short solo works, and written and directed theatrical productions and film. He has given lectures, workshops, and presented at conferences on Queer Performance and on his own work in the US, Canada, Australia and the European Union. Most recent projects include “Dance Me to the End of Love,” a short work exploring love, exposure, the trans body, intimacy, and partner dancing, and the feature length documentary on his work “Fake Orgasm” (Directed by Jo Sol and produced by Zip Films and Executive Produced by Killer Films and Christine Vachon). His short film “Unhung Heroes” is available through Frameline Distribution and is viewable online. He is currently pursuing a doctoral degree at London University’s Central School of Speech and Drama in Queer Performance Practice and Philosophy.