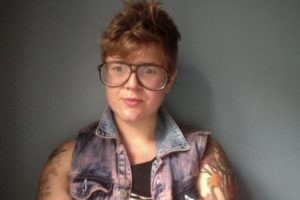 Ray Edwards holds an M.A. from Wesleyan University in Psychology. Ray is a freelance social researcher and grant writer whose career goal is to raise interpersonal and institutional conscientiousness of the subtle ways in which we sustain oppressive cognitive models of social perception in day-to-day interactions. Ray is currently working with researchers at CUNY’s John Jay College on two projects, one of which is to quantitatively describe queer people of color’s perceptions of the criminal justice system, and the other to gauge the accessibility of mental healthcare to male sex workers. Ray is also working with faculty at Wesleyan University to study the historical development and practice of research ethics in the social sciences. Ray is broadly concerned with working to integrate structural elements of queer theory and gender theory into empirical practices in research psychology. When Ray is not surveying people or crunching numbers, they are writing pop music under the name “Little Lion.” They are thrilled to be working as the Survey Coordinator for Trans Bodies, Trans Selves.