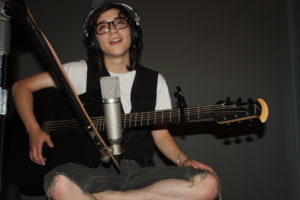 Ryan Cassata is a transgender singer-songwriter & motivational speaker from Long Island, NY who – all by the age of 18 – successfully cut three records, booked and went on several tours, played several of the world’s biggest gay music festivals, won the Harvey Milk Memorial Award, became the youngest keynote speaker for the largest transgender conference in the world, and appeared on National & International TV several times. Ryan plays guitar, piano, ukulele, harmonica, and sings. At the young age of 14, Ryan began to gig across Long Island. Now only three years later he has made over 275 appearances, consisting of tour dates from coast to coast. Cassata performed at the world’s biggest gay music festivals with artists like Karmin, Salt N’ Pepa, Frenchie Davis, Chris Crocker, Tom Goss & more. Cassata has also performed with The Click Five, Austin Gibbs. Jeff LeBlanc, Madina Lake, and One Love. Ryan Cassata is the founder of Artemendous Records, LLC, a record label he created to push his career to the next level while providing support to other local talent. Ryan Cassata is the composer of the soundtrack for “Loop Planes”, an award-winning independent film that screened in the South By Southwest (SXSW) Film & Music Festival (2010), the Tribeca Film Festival. (2010), the International Israel Women’s Film Festival (with The Runaways) (2010) and 40 other film festivals. Ryan Cassata appeared on The Larry King Live Show (2009) and the Tyra Banks Show (2010) for being transgender himself. Aside from being a musician Cassata is a strong advocate for the Transgender community. He travels the States speaking at High Schools, Colleges and Conferences sharing his story with a mission to stop ignorance and bring peace to the world. Ryan Cassata became the youngest keynote speaker at the Philadelphia Trans-Health Conference of 2012. Cassata appeared in Hamptons Bay Magazine (2008), Go Magazine (2008), Closer Magazine (2011), and Pulse Magazine (2012), for his hard work and advocacy. In 2011, Ryan Cassata won the Harvey Milk Memorial Award for the path of equality he created within his high school and within his community. Ryan Cassata writes very passionate lyrics. His words are positive and inspirational to todays generation. Cassata hopes to spread this positivity across the country and around the world in hopes to make people smile and catch on to kindness. Ryan Cassata is doing much more than the average teen. He demands change, he demands revolution, and…he demands PEACE.