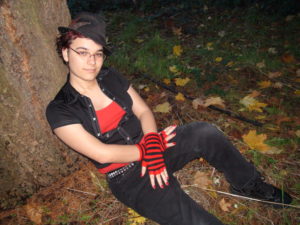 In 2010 Tobi Hill-Meyer made her film making debut, winning an Award for Emerging Filmmaker of the year and being named #3 in Velvet Park Media’s list of the 25 Most Significant Queer Women of 2010. She is a multiracial trans woman with a long history of working with feminist and LGBTQ organizations on a local, state, and federal level, having served on several boards and offering support as a strategic consultant. Since receiving her degree in Sociology and Women and Gender Studies, Tobi has turned her focus to media analysis and productions. She is a founding member and major contributor to the media collective, Handbasket Productions, where she has produced and directed two feature length films and has begun work on Doing it Again: In Depth, an explicit erotic documentary exploring relationship and hookup dynamics among trans women and their partners.